"Les Poissons Voyageurs" is a French and Canadian collective created in France in 2008, with the idea to travel around the world in a van, with music. Throughout the years and the encounters, the repertoire became richer and  the collectif widened its horizons.

Today, "Les Poissons Voyageurs" offer 3 different shows; "the concert" and two other shows in french, one a story telling type and the other a clown show. 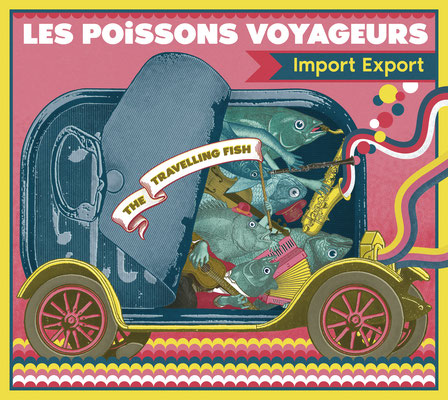 Due to the recent Corona Virus events, the departure that was supposed to be on the 27th of Marche, will be (hopefully) postponed to early June.

The way will be:

From Balkanic Swing to Polyphonic Blues

Every song is and occasion for the audience to join Les Poissons Voyageurs in a gospel choir, a blues song or to create the soundtrack to a mexican wedding.

The show has changed a lot over the years and over 17 musicians have taken part in it since 2008, from a famous balalaika or guitar players from Canada or Russia, violinist or clarinetists from the world over. The repertoire swings between polyphonic american music, balkan blues or romanian horas. the show has been played hundreds of times, from the gypsie weddings in Kharkiv to the Gogol Fest in Ukraine, in jazz clubs in Istanbul or the jungles of New Caledonia or Peru.